When I have the chance to quilt for myself, it tends to be about skill acquisition.  I spend a lot of time thinking about different quilting patterns, but not all of them quilt out the way I envision them.  When I pieced “Whirlygig,”  I was determined to create a secondary quilting pattern to explore.  I had a colorful layer cake and wanted to keep the piecing simple since I’m such a quilting newbie.  I started with one idea in mind, and after I had cut all the layer cake up – I changed my mind.  After all, it’s my prerogative, right?

What I ended up with was two different blocks – what I proceeded to refer to as “the big pinwheels” and “the little pinwheels.”  (Original, huh?)  After I finished piecing it, I took some time away from it to cook up an idea.  One early morning when I couldn’t sleep, I drafted up a plan:

If you look closely at the finished quilt and the original plan, you’ll see I changed it up a tiny bit once it was loaded on the frame and I was stitching it all together.  I shouldn’t tell you this, but I forgot one design element I was planning on using once I got the machine going – so it got edited out.  It was just an idea, after all – and I was fine with it changing during the process.

Working on this quilt soon became all about marking and ruler work.  Having a master plan to refer to was really helpful when working on individual sections of the quilt. 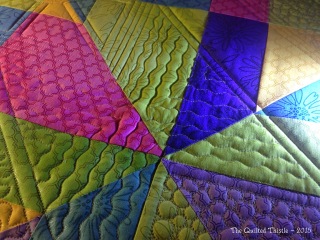 I chose the fill motifs as I went along – The photo above shows the last and probably most difficult decision I made while quilting this.  I just had no idea for a while as to how to fill this hourglass shape.  Since a friend had commented on liking a particular pattern on a previous quilt, I decided to try it out and it ended up giving a nice texture to the piece.

Needing a unifying design element, I chose these spirals to go in the center of each of the pinwheels – regardless of whether they were small or large.  My second unifying theme was using secondary patterning to reverse the visual details on the large and small pinwheels.  For example, if it was a small pinwheel, I quilted it as if it was a large pinwheel.

I also treated the center block as a sort of medallion and gave the quilting a focal motif that was different from the surrounding blocks.  This also gave me an opportunity to practice my micro-stippling!

If I were doing it all again, I would have used more variety in the filler size.  Sometimes the secondary patterning isn’t as visible as I intended.

But once you turn it over and get a look at the back, you can see it way more clearly! 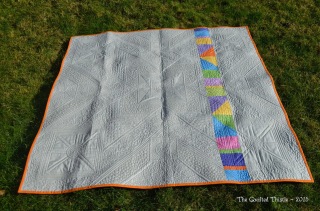 Actually, I liked the way the back turned out so much that I’m contemplating designing my first whole cloth quilt.  It’s amazing how one idea so quickly leads to another.

One thought on “#11: "Whirlygig" and Secondary Patterning”